I am proud to announce that not only is my private detective of the far flung future back in an all book, but that the second installment in this series is also his first full length novel!

HUGH MONN, PRIVATE DETECTIVE: CATCH A RISING STAR returns readers to the island nation of Galveston 2 on the planet Frontera as Hugh is hired as a security consultant for actress Ruby Kwartz when she arrives to film a new vid.
But what was supposed to be an easy assignment turns deadly when Hugh discovers that everyone around Ruby has a hidden agenda and someone wants to make sure this production will be her last.  Can Hugh Monn catch a rising star before she falls?

Thick, red lips were just a shade darker than her crimson skin tone, but both were in striking contrast to her long orange hair. Her eyes appeared to be only irises, as black as a starless corner of the universe resting on a field of white, but that toothy smile was brighter than a supernova. She was dressed in white like everyone else, but her outfit was a sleeveless, short hemmed number at least one size too small, that did everything possible to accent every aspect of her figure.
“Do I have the pleasure of addressing Hugh Monn, the private detective?” asked the older man with an accent I couldn’t place. After all, it’s a pretty big universe and xenology wasn’t one of my strong
suits, so I couldn’t identify any of their races or species. Besides, the woman was the only one present any insensitive jerk would call ‘alien’. Outwardly, all the men appeared to be as human as me.


“There’s no pleasure involved from my perspective,” I said, while motioning my head to indicate his traveling companions.


After writing short stories that were collected for his first book, I wanted to create longer adventures for Hugh in a second anthology. But what would have been the first story, CATCH A RISING STAR, took on a life of its own and became his first full length novel.  Fans not only get more action, adventure, and mystery in this tale; but more Big Louie too. And all within another great cover by artist David L. Russell.

"We're excited," comments Tommy Hancock, Pro Se Partner and Editor in Chief, "to not only have Hugh Monn back for another adventure, but to see Lee push both himself and this wonderful world he's imagined into a full length novel. This definitely different mix of Science Fiction with the Detective genre, as well as Lee placing Hugh somewhere along the center of the Private Eye spectrum makes the concept a fun, exciting one that appeals to many types of readers."

As for Hugh Monn's first book, Ron Fortier, noted Reviewer, Author, and Publisher stated-What is particularly refreshing in these tales is that wisely opts not to make his hero a hard-boiled, typically cynical type. Hugh Monn is a genuinely nice guy who likes people and aliens alike and is sincere in trying to make his world a better place for all to live in. He's a good guy I liked meeting and hope to see him again real soon.

HUGH MONN, PRIVATE DETECTIVE: CATCH A RISING STAR features an excellent and evocative cover by David L. Russell as well as stunning cover design by Sean E. Ali and Ebook formatting by Russ Anderson!
Available in Print at Amazon at http://tinyurl.com/n47oso2 and from Pro Se's own store at https://www.createspace.com/4362923 for only $15.00
This stunning addition to Hugh's adventures is also available for $2.99 as an Ebook!
Available for the Kindle at http://tinyurl.com/makex3b, via the Nook at http://tinyurl.com/mnzgyww, and at Smashwords in multiple formats at https://www.smashwords.com/books/view/335096! 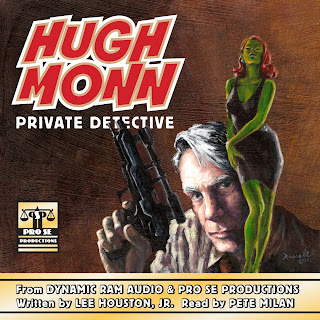 Also, that aforementioned HUGH MONN, PRIVATE DETECTIVE book IS NOW AVAILABLE ON AUDIO!
Voice Actor Pete Milan did a fantastic job recording the collection for Dynamic Ram Audio, engineered by Chris Barnes.
And that creative duo is also reuniting to produce the audio version of CATCH A RISING STAR! I'll be able to announce its release soon, but in the meantime, you can obtain the MP3s of their first production from Amazon here: http://www.amazon.com/Hugh-Monn-Private-Detective/dp/B00CS8UHE6/ref=sr_1_cc_3?s=aps&ie=UTF8&qid=1374498364&sr=1-3-catcorr&keywords=hugh+monn+private+detective

But if that wasn't enough, yours truly has also been hitting the interview trail promoting Hugh!
Although I'm a much better writer than I am a public speaker, you can hear me discussing Hugh and other things here: http://prosepodcast.libsyn.com/pro-se-presents-the-podcast-episode-2-lee-houston-jr-and-hugh-monn-private-detective-catch-a-rising-star
And Mark Bousquet interviewed me for his Atomic Anxiety blog, which you can read here: http://atomicanxiety.wordpress.com/2013/07/23/atomic-interview-15-talking-hugh-monn-private-detective-with-lee-houston-junior
Posted by Lee Houston, Junior at 9:57 AM