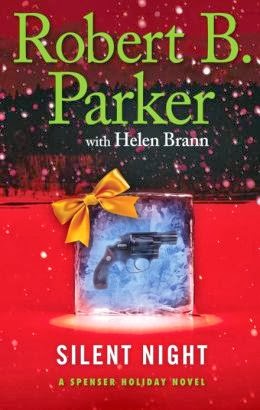 There is no question as to the quality of Robert B. Parker's writing. Jesse Stone, Sunny Randall, the Cole/Hitch westerns, a plethora of other novels, and of course: Spenser.

The famed Boston private detective first appeared in 1973's The Godwulf Manuscript, the first of 40 novels, although the last two were published posthumously, before the Parker estate allowed author Ace Atkins to continue the series.

However there was one last novel, a work in progress at the time Parker passed away in January 2010.

Silent Night is actually a holiday story. Spenser, planning Christmas dinner for longtime paramour Susan Silverman and their friends, is hired to help protect a children's shelter that someone is trying to run out of business. Spenser starts investigating with his usual charm and aplomb, which leads to the inevitable showdown/climax starting at Chapter 23.

Although the novel was finished by his longtime friend and literary agent Helen Brann, and published in time for the 2013 Holiday season; in all fairness to both Robert B. Parker and his fans (me amongst them), it is hard to judge or say anything negative about someone's last work. One must assume the author would have caught and corrected any glitches before declaring the manuscript complete. However I cannot explain the apparent gaffe in Chapter 30, when Spenser says he and Susan will go to New York in January to visit Paul Giacomin "after the debris was cleared from Times Square," which makes me wonder when this project was started. Was Parker and/or Brann referring to the aftermath of New Year's Eve (odd because of using the word debris instead of trash) or an old reference to a post 9-11 world. Either way, I do not know where this novel was to occur within the established Spenser timeline. However, for the Spenser and/or Robert B. Parker fans in the audience, this book is worth obtaining/reading.
Posted by Lee Houston, Junior at 6:38 PM