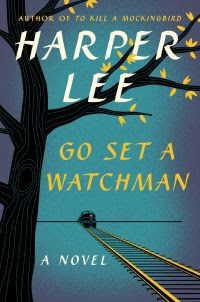 In the now published first draft to what eventually became the beloved classic To Kill A Mockingbird, an adult Jean Louise "Scout" Finch returns to Maycomb, Alabama during her annual vacation from her unspecified job in New York City to an eyeopening revelation of how much has changed in her hometown.

Jean must face altered attitudes towards racial relationships, small town politics, and social perceptions of one's self; while trying to come to terms with the now shattered childhood images of her beloved father Atticus.

Technically, Watchman was written first. Harper Lee's editor at the time saw promise within the tale, but was more taken with the flashback sequences of Scout's childhood than the main story. A few rewrites later, Mockingbird was born. With its successful publication history and the acclaimed 1962 movie adaptation starring Gregory Peck, Harper Lee went on record as saying she would never write another novel, considering how well Mockingbird was received.

The original Watchman manuscript was then thought lost, but rediscovered in 2014 when a new lawyer assigned to represent Harper Lee had to take stock of the author's personal possessions after the passing of her sister, who had previously handled all of Lee's professional and personal business. There are those who question the reason(s) behind its publication, especially in light of the fact that Lee still apparently maintains her decades long reclusive lifestyle, although she now resides in a nursing home due to failing health.

After hearing so many differing opinions about this book upon its release, I tried to keep an open mind when I finally had the opportunity to read it recently. The fact that Scout's older brother Jeremy/"Jem" suddenly passed away from the same heart condition that took their mother before the major events of Mockingbird happened was easier to comprehend than Watchman's portrayal of the beloved Atticus.

In my humble opinion, it is better to view this novel as a historical first draft, since not all of Watchman's subplots are resolved by the end of the book. One can always go back and reread the more treasured and better written To Kill A Mockingbird later.
Posted by Lee Houston, Junior at 5:36 PM