*Despite being the target of recent terrorism, Paris is still hosting the 2015 United Nations Climate Change Conference, but with far stricter security precautions than originally scheduled.
*The World Health Organization reports there is a polio outbreak in the Ukraine, with many children having never been vaccinated against the disease.
*The December 12th elections in Saudi Arabia will mark the first time women have ever been allowed to vote in that country!
*Russian President Vladimir Putin has announced that "If anyone thinks Russia's reaction (to Turkey shooting down one of their SU-24 jets in Syria) will be limited to trade sanctions, they are deeply mistaken."
*Pope Francis has concluded his Papal visit to Africa.
*Roch Marc Christian Kaboré is the new President-elect of Burkina Faso.
*Japan has resumed whaling practices, in violation of an International Court of Justice ruling.
*Munich, Germany's Institute of Contemporary History is planning to published a two volume, annotated version of Adolph Hitler's Mein Kampf, to present in a historical context how "he wove half-truths and outright lies together to sway his followers".
*European countries are still trying to work out all the various logistics as refugees continue to flee terrorist plagued areas of the Middle East.
*Adobe is now starting to move away from Flash.
*The results from the radar, sonar, and infrared scans of King Tut's tomb in hopes of finding Queen Nefertit's Tomb are expected soon.

TERRIBLE TERRORIST ACTIVITIES...
*Terrorist forces are fighting to hold on to illegally obtained territories in the Middle East against World Coalition Forces. Meanwhile, bombs still seem to be the terrorists' weapon dujour for this past week, including three suicide bombers at Lake Chad killing at least 30 people and injuring over 80 others.
*Amongst their other activities, it is reported that ISIS/ISIL forces are now targeting members of the LGBT community in the Middle East.

*Despite more important matters that face that august body, Congress is once again trying to dismantle the Affordable Healthcare Act, aka "Obama Care". 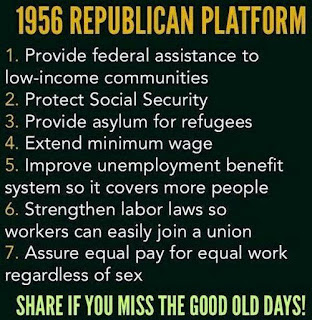 But do you remember how the Republican Party once was?
On the right is an image, recapping the GOP agenda back during the Presidency of Dwight David Eisenhower!
*Believe it or not, 2016 Republican Presidential hopeful Ted Cruz claims that the majority of violent criminals are Democrats, and that it's the Democrats who are conducting a "war on women".
*After the man guilty of shooting up a Planned Parenthood clinic in Colorado admitted that he believed the seriously disproven Republican claims concerning that organization, the GOP is backing away from any public statements previously made, although it still wants to defund and totally close down Planned Parenthood.
*President Barack Obama has been named OUT magazine's 2015 Ally of the Year, for his role in helping the LGBT community.
*The United States Federal Reserve Board has announced it will NOT allow the extension of any loans issued under the George W. Bush administration's "Too Big To Fail" program.
*The U.S. Military has announced it will start considering any capable woman for combat assignments.
ELSEWHERE...

*A married couple were killed fleeing authorities after murdering 14 innocent people and injuring 21 more at a San Bernardino, California holiday party. The reason(s) why remain uncertain at this time, although the couple are suspected of being ISIS/ISIL sympathizers.
*To celebrate the birth of his first child, Facebook co-founder Mark Zuckerberg has announced he plans to donate 99% of his personal Facebook stock to pro-children charities.
*It turns out that the late actress Elizabeth Taylor was doing what she could to help those with AIDS, even when such actions were illegal!
*Professional basketball player Kobe Bryant has announced he will retire at the end of the 2015-2016 season.

THE FREE CHOICE E-ZINE THANKS ITS LOYAL READERSHIP FOR GRANTING US 2,348 PAGE VIEWS DURING NOVEMBER 2015!

For more news at any time, either scroll down to our IN OTHER NEWS feature at the bottom of your screen, or visit any other reputable news source.

Email ThisBlogThis!Share to TwitterShare to FacebookShare to Pinterest
Labels: 2015, news, November 29-December 5, The Week In Review