FOR A MONSTER(OUS) EARTH GOOD TIME...

In December 2012, I posted a list of book recommendations as potential Christmas present reads. The ONLY reason this wasn't amongst them was because it hadn't been released yet.

For fans of Kaiju (giant/Japanese monster) movies, this is the anthology for you!

Monster Earth!, the first release from fledgling publisher Mechanoid Press, is based upon an interesting premise: what if all the major powers of the world had monsters at their bidding instead of stockpiling weapons of mass destruction?

It's a globe and decades spanning anthology featuring the talents of I. A. Watson, Nancy Hansen, Edward M. Erdelac, Jeff McGinnis, and Fraser Sherman; as well as editors Jim Beard and James Palmer.

These seven stories have already been producing a lot of positive buzz even amongst people who aren't fans of the Kaiju genre! 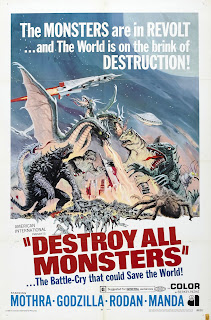 And if you think the Eric Johns cover looks familiar...

Have I mentioned, based upon some of the author essays posted on the company blog at http://www.mechanoidpress.com/blog/ that everyone involved are huge fans of the Kaiju/monster movie genre?

In any event, I personally have already ordered a print copy and when it does arrive (dang snail mail) will be promptly reading and reviewing it here. But the anthology is also available from Amazon dot com in both print and Kindle AND for the Nook at Barnes and Noble dot com.