Yes folks, you read the headline right.
Our very own Waxy Dragon is starring in her very first children's book! 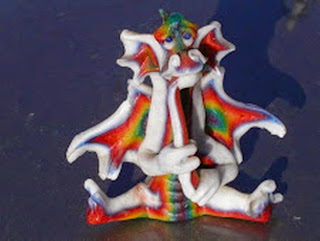 Known as an innovator in Genre Fiction and New Pulp, Pro Se Productions gladly announces the release of the next chapter in its YOUNG PULP! imprint. Authors Roger Stegman and Nancy A. Hansen’s Companion Dragons Tales Volume Two: Finding Waxy!
“This series,” says Tommy Hancock, Editor in Chief and Partner in Pro Se Productions, “is just straight up fun. This isn’t just a bunch of tales about cute dragons and the heroics they do or the humans around them. This series is a passion for the authors involved. A project they not only have put years of work into since the early days of the internet, but one that has made them close friends. Finding Waxy is the tale that basically started it all and now readers can see why Roger, Nancy, and Lee Houston, Jr. all fell in love with this world, these tales enough to create even more of them that readers will get to enjoy in coming years. Although Companion Dragons Tales: Finding Waxy definitely is aimed at young readers, do not believe for a second that there aren’t enough thrills to excite adults as well. Find out for yourself, you won’t be disappointed.”

Roger 'Rusty' Rustman is a very secretive fellow—and with good reason. He's not only an untrained wizard who uses forms of magic that are frowned upon, and trades in enchanted items that aren't exactly approved of; but he travels to dangerous places that other magical people avoid, and then writes about them anonymously.

From his questionable recreational hobbies he has built a tidy second income along with a stockpile of magical resources. Over the years Rusty has gained a reputation as a shady character who operates on the fringes of the Wizards and Witches Council code of ethics while flaunting Wordsmith Guild regulations; but he's really just a quiet and modest writer mage who enjoys a bit of adventure now and then.

The last thing Rusty needs is a small but very noticeable companion tagging along. Unfortunately, while on his latest trip out to the magical Otherworlds, he finds a very large abandoned egg that decides to hatch unexpectedly in his vacation cabin. That begins an entirely bizarre and mystifying set of events that only the cooperation of a spunky and intelligent little rainbow colored dragon can get him out of safely.

Pro Se Productions proudly presents Companion Dragons Tales Volume Two: Finding Waxy by Roger Stegman and Nancy A. Hansen, a series in Pro Se’s Young Pulp! imprint. This imaginative adventure expands the world of dragon familiars and their humans introduced in the first volume and brings a new voice into the storytelling. Hansen and Stegman weave words like the best wordsmiths they have created, making Companion Dragons Tales Volume Two: Finding Waxy a pure joy for all ages and a great follow up to the first volume: A Familiar Name by Hansen.

Featuring a wonderfully whimsical cover by Kathryn Frizzell and cover design and print formatting by Sean Ali, Companion Dragons Tales Volume Two: Finding Waxy is available via Amazon and in Pro Se’s own store at http://tinyurl.com/m8scuv7 for $9.00. E-Book versions of this entertaining action packed tale are $2.99 each at http://www.amazon.com/Finding-Waxy-Companion-Dragons-Tales-ebook/dp/B00NJX2C42/ref=sr_1_1?s=digital-text&ie=UTF8&qid=1410708610&sr=1-1&keywords=Finding+Waxy .