The following is presented solely as comedic satire, without any political endorsements, commentary, or campaigning involved. 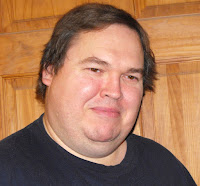 Hello Everybody! Your humble Editor-In-Chief Lee Houston, Junior here!
Since it's the Labor Day weekend here in the United States, once again Waxy Dragon and Autumn the Puppy have the holiday off, and it's up to me to entertain you during this edition of The Sunday Funnies.
Last time, I explored some possible explanations to "Why Did The Chicken Cross The Road?"
Since then, others have weighed in on the subject. 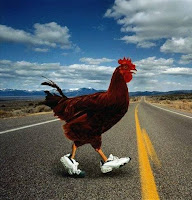 BARACK OBAMA: "The chickens have a job to do and they're doing it, but they need a fair minimum wage just like every hard working American, so they can own their own coops and plan for the future."

HILLARY CLINTON: "What difference at this point does it make why the chicken crossed the road? I never had any correspondence with that chicken, e-mail or otherwise, concerning its plans."

THE REPUBLICAN PRESIDENTIAL HOPEFULS: "What chicken? Is it an American citizen? Is it a registered voter? Whose it favoring in the polls? It's not planning to steal the job of a decent, hardworking American chicken, is it?"

YOUR REPUBLICAN CONGRESSIONAL REPRESENTATIVE: "Although I voted to let the chicken cross the road, I am now against it! It was the wrong road to cross, and I was misled about the chicken's intentions. I am not for it now, and will remain against it." 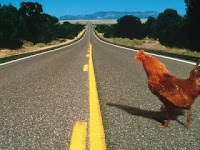 YOUR DEMOCRATIC CONGRESSIONAL REPRESENTATIVE: "Unlike my esteemed colleague, I stand by my original decision. The chicken has constitutional rights that should not be suppressed."

POLITICAL PUNDIT COMMENTING ON THE SITUATION: "It is just the nature of chickens to cross roads. But when, where, and why it crossed the road can be important indicators of our economic and political future."

REPORTERS: "We have reason to believe there is a chicken, but we have not yet been allowed access to the other side of the road, due to national security issues."

A LOCAL FARMER: "In my day, we didn't ask why the chicken crossed the road. We just made sure it got back to the farm safely because we couldn't afford to lose any chickens, what with how expensive it is to be a farmer nowadays."

And on that note, I think we can safely lay the chicken issue to rest.
Thankfully the ladies will be back next weekend with their annual Back To School edition of The Sunday Funnies!
Hope everyone was entertained by the above musings on the subject.
At least I didn't ask a more controversial question, like: "If a tree falls in the forest and FOX 'news' wasn't there to cover it, would they still consider it President Obama's fault?"
Have a great week and enjoy the rest of the Labor Day weekend.—lh,jr.
Posted by Lee Houston, Junior at 10:33 PM