Okay folks, I have read a lot more books than I have posted reviews for in the past months, so it's time to do something about the backlog... 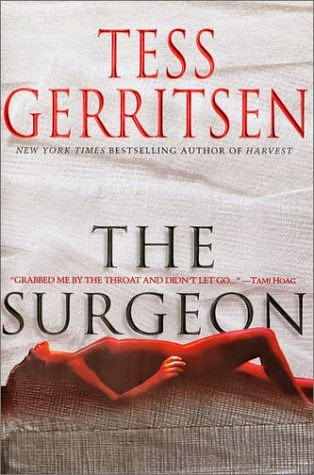 As a fan of the Rizzoli and Isles television series on TNT, I became curious of their literary origins, and so checked out the first book in their series from my local public library.

The Surgeon by Tess Gerritsen is a complex and intense thriller about a serial killer apparently picking up where he left off after resettling to Boston, especially considering that the only survivor of his previous rampage has relocated there herself.

The book is a real page turner. There were times when I was almost too scared to read any more, yet anxious to find out what happened next. Gerritsen herself has a strong medical background that is well displayed within her writing. I freely admit that there were times when I didn't quite understand all the science, but that did not detract from my overall enjoyment of the novel.

However, while fans of the aforementioned television series might be disappointed that only the Jane Rizzoli character (and some of the supporting cast) is established in this book, they can take heart in the fact that she is accurately portrayed as presented here. It is my understanding that Doctor Maura Isles debuts in The Apprentice, a direct sequel to this novel, which I hope to read and review at a future date.

I do recommend this novel, although I also humbly suggest taking a break and reading something in a different genre to relax and destress with afterwards.