Hello Everybody! Waxy Dragon here!
Sports fans are excited about today, because it's the end of the football season with the 49th Super Bowl, I mean, "The Big Game".
Sorry for the editing, but only licensed sponsors can use the official title.
I do agree with the fact that they always try to play the game someplace that neither side calls "home", but I'll tell you one thing. Considering the average size of adult dragons, I've seen much bigger bowls than the one they're playing football in today.

It all comes down to two teams in one final contest, until it starts all over again later this year. Fans are divided between the Seattle Seahawks and the New England Patriots.
Hmm... birds versus people. Geez, flying creatures will always have the advantage over anything stuck on the ground.
The one thing I don't understand is, why do they call it "football"? The players rarely use their feet, except for kicking. There is a whole lot of running around during a game, so why didn't they just call it "race ball" or something like that? 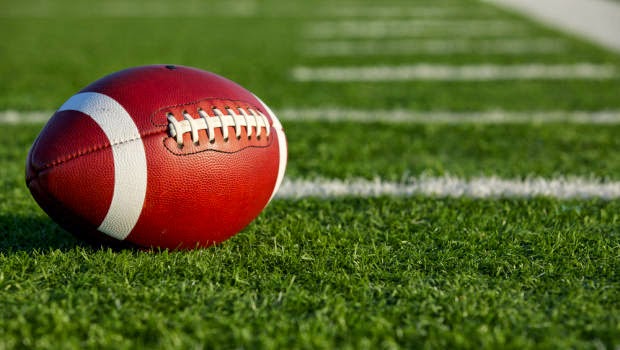 And why do they call the lead guy on each side the "quarter back"? Is that all the change he got after treating the team to lunch?

Did you hear about the football player who had an emergency and tried to get a hold of his coach at home.
When the wife answered the phone and told the player the coach wasn't home, she then asked the man for his number.
"3," said the player, before he hung up.

Can you imagine a grade school coach explaining football to kids?
"The game helps you develop individuality, initiative, and leadership skills. Now go out there and do exactly what I tell you to."

How do football players stay cool during the game?
They don't have to worry about that. There's lots of fans at the game.

And now, to conclude this special look at "The Big Game", we present a true comedy classic courtesy of YouTube, as Andy Griffith explains What It Was, Was Football. The illustrations in the video are by George Woodbridge, from the 1958 adaptation of Griffith's routine in Mad magazine!

Have a great week everybody, and please be back here again next weekend for more Sunday Funnies.--wd.
Posted by Lee Houston, Junior at 12:09 PM

Email ThisBlogThis!Share to TwitterShare to FacebookShare to Pinterest
Labels: 2015, Andy Griffith, February 1, Looks At "The Big Game", Sunday Funnies, Super Bowl, Waxy Dragon, What It Was Was Football by Andy Griffith